Zero-mode Waveguide - a hole, tens of nanometers in diameter, smaller than the wavelength of light used. Providing a window for watching DNA polymerase write.

Last week saw something of a historic announcement that may well be seen in grander light by our offspring than us. 23 & Me announced the $999 Exome, all the protein coding regions of our genome. This for the first time makes it feasible to extract significant amounts of genomic information from patients, consumers & trial subjects. At the same time the founders of Complete Genomics wrote an article on the lowering costs of sequencing, showing some great numbers on technologies that use less reagents, cheaper machines and faster results. Advancements are so frequent in this field it seems, though what gets me really excited is the concept of SMRT (Single Molecule Real Time) sequencing; the idea of reading a strand of DNA one letter at a time as it’s written. 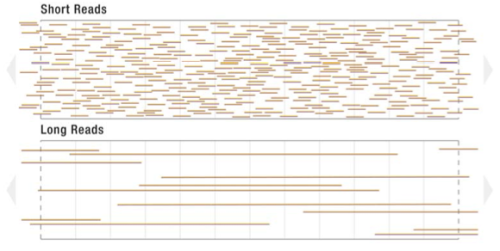 Most of our progress, like the $999 exome or the success of Complete Genomics has been possible as a result of High-Throughput sequencing, which evolved from the original Sanger sequencing methods. Whereas, Sanger sequencing would spit out few hundred letters of  DNA at a time, HT sequencing would spit out much less but at a faster rate. SMRT offers to give us long-reads, thousands of letters, at a fast rate. Several “in-progress” technologies that are promising long-reads range from pulling a DNA strand through nano-pores or using a large single atom that would run across a strand. ZMW (zero-mode waveguide) takes a unique approach in that it uses DNA Polymerase, the default DNA writing nano-machine in our cells to give readings as the strand is being written with fluorescent letters.

Although this is exciting stuff, I wonder how much it will help in the adoption of genomics in medicine. The old paradigm of pills and vaccines &  seeking magic-bullets it seems is embedded deep in our economic and psychological fabric. Now that the cost of sequencing is comparable to most other medical tests will it become as common-place as ordering an MRI or getting a new hip? Doesn’t seem like a $1000 price-tag would stop anyone. No, what has happened is we’ve handed kindergardeners college textbooks, it’s too much information and they haven’t a clue what to use it for. More than faster and cheaper, we need user-friendly, digestible data interpretation. ZMW and SMRT is sci-fi cool but if there’s anything to be learned from the world’s largest technology company it’s that adoption is more a game of collective-psyches than raw science & engineering.

How Low Can We Go? Molecules, Photons, and Bits by Clifford Reid

To the man who showed my whole generation the correlation between engineering, usability & adoption 