When confronted with the mortality of life, it becomes painfully clear that medicine has not been able to keep up with information and computational innovations. At the heart of the problem stands  the drug development process, where an average of 5 to 10 years of research and billions of dollars worth of investment often fails to produce a product.

Figure 1 | Probability of success to market from key milestones. Data: cohort of 14 companies.

In the past few years, molecules in development have seen a frightening rate of attrition. The most capital and resource intensive period comes during the clinical trials, which can be broken-down into the following stages: Phase I trials evaluate if a new drug is safe, Phase II and Phase III trials assess a drug’s efficacy, monitor side effects, and compare the drug to similar compounds already on market. Recent studies by the Centre for Medicines Research, places Phase II success rates at 18%, lower than at any other time during drug development [1]. Spending on average of $300 million to $1 Billion up until this point of research is par for the course [2].

By contrast, computational drug design strategies have made tremendous advances in the new millennia with new tools to identify targets and virtual screening assays. These include structure-based tools to lead identification and optimization utilizing X-ray crystallography. As well as, high-throughput target-based screenings of key protein families like G protein-coupled receptors. Promising indicators of computational drug designs are encouraging new companies to court Big Pharma, who to-date have relied on academia or internal projects for computation. For a company like GeneDrop, even a fraction of the development budget would be adequate to deliver favorable results.

Drug development’s addressable market-size for global corporations such as Novartis or Roche, which have between 20-100 molecules in the pipeline at a given time, is estimated at  $1.11 Trillion in 2011; down from $1.24 Trillion in 2001 [2]. There are approximately ten large pharmaceutical companies and many small ones with one or two late-stage molecules in development. 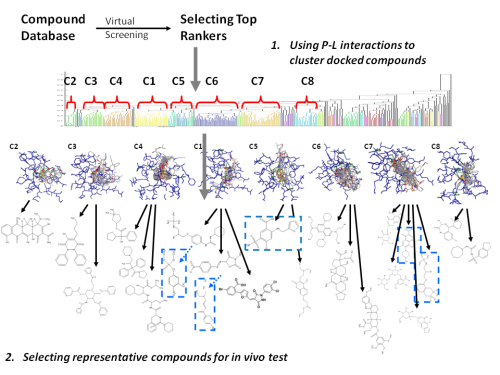 To-date, most computation in the space has been limited to early-stage research on the discovery of molecules prior to the clinical trial phases. However, the fall in market cap has sent drug companies scrambling as patents on existing blockbuster drugs near expiration, and those in development see increasingly high failure rates. This begs the question: why are computational resources being spent in the early-stage, when most failures occur in the late-stage, during Phase II?

Fig 4 | Pharmacogenomics attempts to correlate how individuals will respond to drugs based genomic variability.

As always, cost has been a primary factor. Late-stage computation has meant analysis of bio-metric data, which has been limited to blood-work and questionnaires of trial subjects. The pie in the sky of course, has always been genomics, the price of which was deemed too high. Even up to a couple of years ago, it would cost over $10,000 to sequence an individual. With Phase II and III trials consisting of hundreds to thousands of patients, the method was rarely used. As of the last few months this is no longer the case, with the cost hovering around $5,000 and quickly approaching $1000 per patient.

So, we are faced with an enticing opportunity for information technology to rescue a high-capital, old-world industry. Threading this needle however is no easy task; entrenched industries with high quarterly revenues are notoriously conservative when adopting innovation, especially from the outside. Adding to this is the high barrier of the technical languages of the hard-sciences and the networking culture of global corporations. Luckily both are boundaries which have been broken before in other industries and we can be optimistic; if anyone can break it, it is the passionate and talented.